To me, Brothers Osborne are almost an anomally in the Nashville country scene, equally accepted by the mainstream labels and country purists, a mix of deep, gravelly vocals and guitar slinging with catchy hooks and rootsy songs. It shouldn’t work in Nashville. Of course, that’s not a slight on the Brothers, more the Nashville pop-country chart. 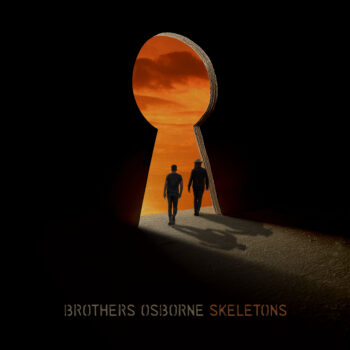 Following up their debut album Pawn Shop, which spawned the singles Stay a Little Longer and 21 Summer, 2018’s Port Saint Joe showed a gradual progression from the band, a simpler production sound (all record in a Florida beach house) and an eclectic mix of styles. October 2020 sees the Brothers release their third studio album, Skeletons, with lead single All Night suggesting even more subtle tweaks to their ever-progressing sound.

Album opener Lighten Up feels like a space odyssey with slide guitar before breaking into the rocky, wah-fuelled riff and TJ’s unmistakably baritone vocals. It’s a simple footstomping country song that’s simply made to open an album and a gig. Sure, it does tread that cliched lyrical ground of “put your lighters in the air” that we’ve heard in a thousand country songs, but you almost forgive Brothers Osborne for the musical craft that surrounds it. Some time in 2021 (probably… hopefully), this will make an awesome show opener.

The guitar riff, TJ’s “Woo!”, the driving drum rhythm. It all adds up to make All Night the perfect next song, keeping the pace of the record coming at you full tilt. This is the type of song that shows just how smart Brothers Osborne are. Mainstream listeners will love the catchy hooks, chorus and hand clapping moments, whereas others will enjoy John’s ever-solid guitar work. It’s a 100mph workout and a song in the same vein as some of the Brothers greatest.

Expecting a bit of time to breathe? Not quite yet. All the Good Ones Are keeps up the breakneck pace of this record. Another song where, if you really listen, John’s guitar work is all over it. It’s the sign of a truly great guitarist that he can be adding so much to a song without it always being a 30 second shredded guitar solo. This song  is built on layers, whether it’s John on the guitar, the spacey synth, TJ’s driving vocal through the skyscraper-big chorus or the acoustic guitar break that sounds like it came straight from The Who, it all adds together to make this whirlwind of 80s sounding country rock hit the mark.

I’m Not for Everyone gives us a little slowdown (a little…) and time to showcase the Brothers great songwriting chops. A song about accepting that you simply can’t please everyone, featuring a joint vocal with John taking the limelight briefly. “I’m always speaking my mind when I’m better off biting my tongue… good for some, but I’m not for everyone” is probably an important thing to accept in country music in 2020. Once again, this is a catchy-as-hell chorus and modern country as (I think) it should be.

The intro to Skeletons is one that’s bound to get crowds losing their minds. John’s guitar tears through the stomping drums, again, just listen out for John throughout and he’s always doing something interesting on the guitar – from big, banjo-inspired riffs to those little fills. He’s genuinely morphing into one of the best ‘sidemen’ in music these days, he can sing and boy can he play! Again, there are little nuggets of lyrical gold to pull out of the song, “You got skeletons in your closet, and I got bones to pick with them” is just a bang on badass country music lyric.

One thing Brothers Osborne know how to do well is a drinking and smoking song. Back on the Bottle chucks up a classic country rockabilly riff, turned up to 11, and has one of those big drink-a-long choruses. It’s followed up by our first real chance to take a breath on the record, High Note is a song in the same vein as I Don’t Remember Me (Before You) and gives us another taste of how the Brothers can really make a song soar. A song about ending things at the right time, TJ sings “let’s say goodbye on the high note”. It’s a misty eyed ballad fuelled by the perfect blend of TJ’s emotional vocal, superb backing, a relentless acoustic guitar, beautiful.

Every great band needs an instrumental and John gets his chance to chicken pick the hell out of his tele on Muskrat Greene, a song named in tribute to a Deale dockworker who was well known for being “a man of stunning stomach capacity”. Honky tonk piano, a guitar that’s dropped straight from the rockabilly archives and great musicians showing off their craft – I’ll say it again, every good band needs an instrumental!

The pace doesn’t slow down as we roll into Dead Man’s Curve, an almost spoken-word intro from TJ is hurried along by a frantic drum beat. Lyrically, this song is a lot of fun, all about that one girl in town who everyone wants but has a crazy family that means “You take one step onto that front porch, And you one crazy motherf—”. It’s a song that, at two minutes twenty two, goes at breakneck speed.

Make it a Good One is a song that thematically harks back to While You Still Can from Port Saint Joe. It’s a slower song that takes a step back stylistically to some of the Brothers’ previous work.  TJ sings “Make it a good one, make it a long one, if you’re gonna pour one make it a strong one, Give all your heart to someone, leave nothing unnsaid or undone”. It’s nothing we haven’t heard before, but perhaps a lesson worth remembering more than ever.

The positive sentiments and life lessons continue on Hatin’ Somebody. Again, it has a slower, breezier Port Saint Joe vibe that’s a nice reprieve from a lot of the breakneck rockers before it. The line “hatin’ somebody  ain’t never got nobody nowhere” is another that probably lands as a reminder to us all at an important time.

This twelve track album rounds off with the laid back Old Man’s Boots. Brothers Osborne have always had a knack for making music that remains true to themselves and their roots, this is just another song that acts as an ode to their father and his resilience. “I’d be lucky to walk a mile in my old man’s boots” is the perfect line to sign off this album, with a nod to their home and the people that helped make them.

Whilst I enjoyed Port Saint Joe I was hoping for something a little different from Brothers Osborne on Skeletons, and boy did we get it! An album where the boys have clearly turned the volume up a notch and explored their rockier influences to great success. Sure, things can feel a little relentless for the first half of the album but that just adds to the excitement for me, John is given all the opportunity he needs to show off his guitar skills without over indulging and TJ’s deep vocals find their perfect home within the distorted guitars and pounding drums. It’s an impressive return from Brothers Osborne, who just keep my faith in Nashville country restored!

One thought on “Brothers Osborne – ‘Skeletons’ Album Review: The Third Album from the Country Rockers Turns Up the Grit”