Bruce Springsteen – ‘Letter to You’ Review: The Boss delivers once again and we’ve never needed him more!

There’s no doubt about it, the dark seems to outweigh the light right now. A year of hardship, of fear, and of separation from the people and things we love has left us battered and bruised. It’s in these times that we don’t just want, but need our artists. After 9/11 New Yorkers shouted just that at him across the road, “we need you”, and that message now applies to people across the planet. To many, myself included, Bruce Springsteen is more than just an artist, he’s comfort, he’s inspiration, both he and his music are a reason to keep going. So, with the announcement that The Boss and his E Street Band had got together at his ranch and recorded a new album over a few days earlier this year, a glimmer of light was shone upon the world. 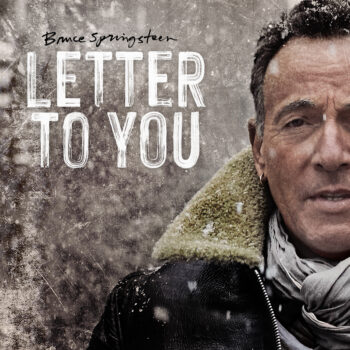 Let’s kick off by addressing a potential elephant in the room. This is a country, roots and Americana site. If you don’t think Bruce epitomises American music, I cannot help you. There, that’s been said, now to the music.

It’s a thoughtful and somber acoustic guitar and vocal that kicks off the record on One Minute You’re Here. Bruce evokes the Nebraska sound as he ponders the temporary nature of our existence and sets the tone for the record by reflecting on years gone by, including the potential reference to some of his previous works in the line “Red river running along the edge of town“. The song acts as a tone setter, a statement of Bruce’s frame of mind and puts the listener in a trance as he sings the refrain “one minute you’re hear, next minute you’re gone”…

That’s until the E Street Band slaps you right across the face with the unbridled joy of Letter to You. This is the first time the legendary band have ever recorded live like this and this song captures the energy, musicianship and happiness the band can conjure up like magic. Once again, it feels like Bruce is laying out to the listener what this record is all about as he sings “In my letter to you, I took all my fears and doubts, In my letter to you, All the hard things I found out”. The man who has played a thousand characters in his songs is about to open the door to his own self, what he’s learned from life and what makes him tick. This is post “Springsteen on Broadway” and autobiography Bruce, he’s found the rearview mirror.

Don’t expect a moment to breathe as an extended, organ-driven intro brings us pure E Street Band at their finest on Burnin’ Train. Close your eyes and you can see the crowd with their arms around each other, singing every word, a sight snatched away from us all, but a hope from Bruce that we’ll see it again. This is a love song, could it be to his wife Patti? His band? Whoever you think it’s aimed at, the driving rhythm of one of music’s finest ever bands makes you feel positivity from every note as Bruce sings “Sheets stained with sweat, Outside the endless rain, Darlin’ I’m blessed in your blood, And marked by Cain, Take me on your burnin’ train”.

Janey Needs a Shooter slows things down whilst the band sounds as big as ever. Swirling organs and jangling guitars complement Bruce’s rough-as-ever voice in a way that’s almost reminiscent to Backstreets.

Consider the band mates lost along the way, Clarence Clemmons, George Theiss, Danny Federici, Robbin Thompson, to pay tribute to a few, and Last Man Standing takes the deepest of meanings. Bruce flicks through “faded pictures in an old scrapbook… When you were hard and young and proud”, remembering his beginnings with the Castilles and others and the people who carried him along on his journey. As he ends the chorus with “I’m the last man standing now” you feel Bruce is a man left behind by his friends, but then something special happens, the sax of Clarence’s nephew, Jake Clemons, comes in, you remember Stevie and Nils by his side, Patti on the other, Max Weinberg keeping rhythm. Bruce is anything but alone, in fact, the show goes on as always as he sings “You count the names of the missing as you count off time”.

“Dreamy afternoon ‘neath the summer sun, We’d lie by the lake till the evening comes, I run my fingers through your sun-streaked hair”, the opening lines of The Power of Prayer transport you to a sepia tinged memory. Not about prayer in its literal sense, but how memories and the people that share life with us are what lifts us. Marked with more outstanding sax from Jake, it’s a song that’s sure to bring crowds together when it finally gets played live. Just as it will bring us all together in our own homes.

Bruce has never been afraid to speak his mind politically and, in such an important year for America and the World, its no surprise that he addresses the state of things. The House of a Thousand Guitars addresses the “criminal clown” who “stole the throne”. But this isn’t a Born in the USA style battle cry against the state of things. Instead, an older and wizened Bruce points to music and how it can bring us together. Maybe not as we sit “bitter and bored” but when we can go to “the stadiums and small town bars, we’ll light up the house of a thousand guitars”. It’s a hopeful song about working together to find the spark (Dancing in the Dark reference inbound) that lights up the house. It’s about how the unity of people, how art and music and joy is the only way we can “Wake in search of the lost chord, That’ll band us together for as long as there’s stars“.

Through the imagery of dry, accrid, rural America, where the people feel no hope, Bruce continues to decry the desperation that leads people to make bad decisions and rely on the wrong people (read as: Donald Trump). Bruce cries “Sometimes folks need to believe in something so bad, so bad, so bad, They’ll hire a rainmaker”. It’s almost a justification of why America got into its current position and a call to action for people to stand up and do the right things. It’s an unabashed rock song that doesn’t do much to detract from the message at its core.

Bruce carries over the ghost of Western Stars into If I Was the Priest. On the face of it, this song works as a great tale of a small town in the American West, but listen to lines like “Forget about the old friends and the old times, There’s just too many new boys tryin’ to work the same line“, and you could read it as Bruce passing the torch on to younger artists as he reflects on friends who’ve since passed on. “Things ain’t been the same in heaven since big bad Bobby came to town” provides a nod to the passing of time, perhaps how Bruce’s own heaven has changed forever. His voice stresses and strains throughout, it feels like a vulnerable moment for Bruce. He ends the song singing “Jesus is standin’ in the doorway, Six guns drawn and ready to fan, Said, “We need you son tonight up in Dodge City”.

The second song released from the record, Ghosts, is the song that we needed this year. Full to the brim with all the joy that Bruce and the E Street Band bring, just hearing it can give you goosebumps and provide you a reminder of the things that make life so great and the reasons we have to be hopefully. Right from the opening chords to the soaring chorus of “I’m alive, I can feel the blood sugar in my bones” this is a song built to remind you of the power of music. That’s just the face of it, beneath the surface is a story of those absent friends, how Bruce needs them by his side, he “makes my vows to those who’ve come before” every time he plays and declares “meet you brother and sister on the other side.” Once again, Bruce sings about being left “alone” but the very nature of this song is anything but alone. It’s joyous, it’s the love of friends, bandmates and fans coming together and it’s going to be one HELL of a show when this gets played for 80,000 people.

A touch of Dylan hits the lyrics and poetry of Song for Orphans, a song that chugs along. To try to tell you exactly what I think this song is about would be impossible. Springsteen wevaes the narratives of a series of characters, those trapped in the American ‘dream’. As the harmonica rips through, you’d be forgiven for thinking you’d stumbled on a war protest song from the 70s.

Letter to You is just that, a letter to us all, and it makes sense to sign it off with the thoughtful I’ll See You in my Dreams. On this record, Bruce has been more honest than ever. You’ve seen more of him that we’ve ever seen before. At 71 years old, he’s chosen to look back at all of the madness. He’s also reached an age where he’s lost enough to know pain, loved enough to know true love and felt enough highs and lows to understand the journey of life. The song opens with “The road is long, And seeming without end, Days go on, I remember you my friend“, and goes on to say “I’ll see you in my dreams, When all our summers have come to an end, I’ll see you in my dreams, We’ll meet and live and laugh again“. Bruce bares his soul throughout Letter to You but waits to the very end to hit you with this hammer blow. After all, he’s the man many of us look to in order to heal the hurt, so when he lays his own fears and heartbreaks on the table we feel them as if our own. It’s a stunning song to end this record on and truly another masterpiece in the works of Springsteen.

When Letter to You dropped as the lead song from this record, it felt like the reprieve we all needed. After all, the greats are signals of strength and almost make us feel invincible. Bruce has always stood tall as a man of the people and his reappearance alongside the E Street Band made everything feel OK for just a minute. As the album is now unleashed on the world, it feels like Bruce’s own chapter in life is crossing with so many of our own. If nothing else, this album will give you an hour away from real life, but on a deeper level, it’ll help empower you to feel. Many of us are scared, life seems more fragile now than ever, but Bruce reminds that it does go on, it will be OK and my god will the E Street band be ready to reopen the world for business when the day arrives.

6. The Power Of Prayer

7. House Of A Thousand Guitars

One thought on “Bruce Springsteen – ‘Letter to You’ Album Review”