After the huge success of her latest EP, soul fuelled, Nashville loving, Welsh singer/songwriter Laura Evans is delighted to release her brand new single “SOLO” accompanied by a music video.

Laura Evans is truly making her mark and rise in the country/blues world after her hugely successful last 3 singles and EP release “Running Back To you”  the EP’s infectious, debut title track ‘Running Back to You’ charted and went straight to Number One in the UK iTunes Blues chart. The single also entered the US Blues Chart, peaking at Number 43.

Her second single ‘Drag me Back In’  has been getting well-deserved radio play on Planet Rock  and earned huge praise BBC Radio Wales and was added to their Welsh  A- LIST. It was also added to the popular Spotify editorial playlist ‘Nu-Blue’, curated by Heidi Shenk, alongside US artists like Larkin Poe and Dave Stewart as well as her 3rd single “Take Me Back Home” being added to BBC Radio Wales, Welsh A List and Spotify editorial playlists “Very Nearly Nashville” and Apple Music’s “New In Country” playlist alongside Taylor Swift & Eric Church.

Laura co-wrote the song with her friend and fellow Welsh songwriter Stace James from Swansea. 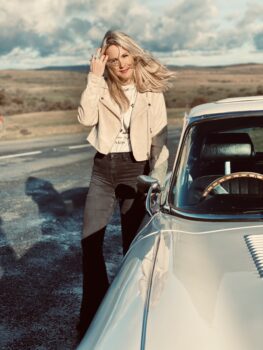 “Stace and I have written several songs together over the years” explains Laura, “Stace works with Kobalt Music and so most of the songs we write together are always pitched to other artists, as was “Solo” at first. It was always a song we both loved and after nearly getting it “cut” several times and then nothing happening, I decided I would release it for myself. So I took it to my producer Josiah J Manning at Momentum studios and we re-recorded vocals and put a new country blues spin on the production”

Laura is one of the new wave of British country-blues and soul music singer-songwriters whose work does more than echo and emulate the traditions and trends from the US and Nashville – they add homegrown UK talent, traditions and technical expertise into the mix. Laura has a powerful new music video to accompany the single that she shot down in Plymouth filmed, directed and edited by Rock Blues artist Kris Barras.

“I think the main message of this song is empowerment and independence! I’ve always felt more powerful flyin “Solo” says Laura  “so it was important we created a cool video to show that too” “Kris Barras is not only an amazing artist himself but also a super talented videographer, so after some conversations back & forth, he had a great vision & idea for the video and did an amazing job of creating a strong beautiful visual we wanted, I love it”