It’s only a few months since The Cadillac Three released Country Fuzz, but clearly a year off the road has given them time to hit the studio and make the most of their free time. TC3 are somewhat a ‘meat and potatoes’ band for me, you know what you’re going to get – fuzz-soaked southern rock. There’s rarely much gloss on it, their success being a bit of an anomaly in Music City, perhaps nudged along by lead singer Jaren Johnston’s successful songwriting career. 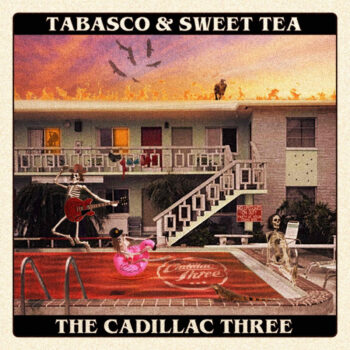 The band only announced Tabasco & Sweet Tea about three days before release. A welcome surprise to hear new music and a sign that, with two albums in a year, the band’s creative output hasn’t been adversely affected by Covid. But my big question was, are we getting more of the same from TC3? The first four albums were all good, if a little similar stylistically.

The opening track, and title track, proves that there may be a little more to TC3 than I’d originally thought. Sure, there’s a nice little guitar riff, but it’s all backed by a groovy rhythm that feels like it’s been lifted from a 70s Booker T and the MGs tune. The guitar solo has Johnston’s signature fuzz all over it, as backing singers and that funky rhythm give the whole thing a jam session feel.

Stop That Girl keeps things going on exactly the same level as its predecessor. Country Rock fused with 70s disco and funk, its nice listening and groovy stuff. The same can be said as we roll into Head Over Wheels, it’s the same as the opening tracks, just a tad slower tempo. It’s all cool, funky stuff, you’re not going to find much if you’re looking for lyrical depth but that’s never been TC3.

Sweet Southern Spirit is the same story as before. Great listening, toe tapping music. Road Soda adds hint of, bear with me here, Bruno Mars-esque backing vocals. Of course, heavily inspired by funk and soul music. There’s a really cool instrumental breakdown here, like I mentioned before, there’s a jam room feel to it.

Bridges and Devil’s Lettuce roll by with the same kind of feel as what’s gone before, listen intently and you probably won’t get much from them, but play them as background music or when you’re driving and they’re spot on. Crispy is a melting pot of instrumentation that all blends together nicely without blowing your mind.

The intro to Money Ain’t Shit has a great riff. It’s got a bit more of a chorus, as Johnston sings “money ain’t shit if you ain’t got love“. Cool song. There’s hint of electronic music in here, almost Chromeo-inspired. The same can be said of Turn the Radio On. It’s drenched in 70s inspired funk guitar, Johnston channeling his inner Nile Rogers.

The album closes with Sabbath on Cornbread. It’s another song in that autobiographical style that TC3 like to produce. Johnston sings “some might call us a crossbreed” and that pretty much sums up the way TC3 approach their music, and this album in particular. It’s country, rock, soul, funk and more.

All in all, Tabasco & Sweet Tea is an interesting album. It seems like TC3 used up all their fuzz on Country Fuzz earlier this year, and it’s nice to hear them approach things slightly different stylistically. I’ve often found them a little ‘samey’, although it’d be nice to hear a mix of these styles on the same record.

It’s a really good effort from the band, and the funky, disco influences work incredibly well. If you’re looking for something to have on in the background, or a vinyl that’ll set the tone for a party, this is the one. As ever with TC3, if you want to sit down with your headphones on and discover the music, you won’t find a huge amount below the surface. But hey, that’s not what TC3 are about, they’re a great jam band that’ll get your foot tapping.