Luke Combs – ‘What You See Ain’t Always What You Get (Deluxe Edition)’ Review: Combs Re-releases 2019 Album With 5 New Songs

More and more Nashville artists seem to be going down the route of the ‘deluxe album’, meaning a re-release of their last album with a couple of new songs thrown in. We’re now at the fourth iteration of What You See is What You Get, having released five songs on the EP The Prequel, then added the pandemic-inspired Six Feet Apart earlier this year, now we’ve renamed it and thrown in another five songs.

The idea of a deluxe album is curious, is it because the artist feels these songs just have to go with the previous recordings to complete that body of work? Or is it the more likely scenario that someone at the record label feels like it’d make more money to shove them on another album, boost sales and make a bit more cash? Either way, it’d shouldn’t be held against Combs, this is common practice now across the whole music industry.

Anyway, onto the music. The original album, What You See is What You Get, was an absolute smash hit for Combs. As of going to press, the album has spent 25 weeks in the #1 spot and sold well over 1,000,000, helping him along his way to multiple CMA wins. It’s fair to say the album has helped solidify Combs’ reputation as one of the biggest newcomers in mainstream Nashville country music. He was due to headline this year’s Country2Country Festival in the UK before it was postponed, showing just how quickly he’s risen up the ladder to stand alongside Music Row’s biggest acts. 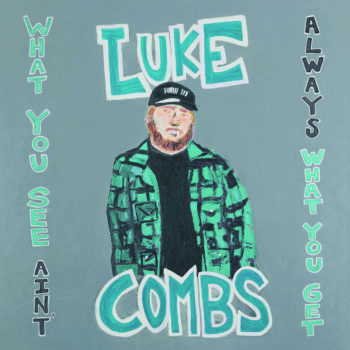 What You See Ain’t Always What You Get comes in at 23 songs, so there’s no arguing you’re not getting value for money (unless you already own The Prequel and What You See is What You Get, in which case you’ll now have some of these songs three times). The 18 songs which were released on the original don’t need a review, we’ve all heard and spoken about them, they’ve achieved great commercial success and helped Luke become one of Nashville’s biggest stars.

The first of the new songs is Cold as You, a typically ‘big’ song. Combs kicks off with a description of a small town, referencing all the clichés such as whiskey, bar stools, beer and honky tonk music. As far as Nashville country goes, it’s a decent song, your classic fist-in-the-air breakup track. It’s produced for arenas with a big chorus, guitar solo and the usual. If you’re looking for lyrical depth you’re in the wrong place, but it does a job.

The Other Guy slows things down to balladeer territory. Combs husky vocals are powerful and built for this kind of tune. Again, it’s standard Nashville Music Row stuff and it’s decent. Big big choruses, made for those arenas Combs is now filling (or at least was and will be in the future) and that guitar solo once again make this unmistakable. Two new breakup songs in and you’re starting to worry about Combs a little. Combs is singing about the front he’s putting on after a breakup and how deep down he’s not doing ok, decent little song.

Up next is Comb’s version of a honky tonk song in My Kinda Folk. Musically it’s a fun little song, filled again with the clichés of Nashville country music. It’s a party song that’ll surely work well after a few beers in a live setting. It’s Music Row country without a doubt, but its done well.

I was thrilled to see Amanda Shires get a little limelight on Without You. One part of The Highwomen, a member of Jason Isbell’s 400 Unit, superb singer and fiddle player and a great Americana artists in her own right, it’s nice to see a talented female get a spot in the limelight from mainstream country. Kudos to Luke for doing his part to make this happen. It’s a decent song giving some credit to his partner for doing the hard work to help him live his dream. Once again, we’re in big arena ballad territory with this one, crashing chords, powerful vocals and the fiddle and lap steel swirling.

Finally, we come to Forever After All, where Luke kicks off with talk about “cold beer” and we’re firmly placing our feet back in Nashville cliché territory. As before, it’s a big arena ballad with that big chorus and Comb’s driving it along with his vocal.

What You See Ain’t Always What You Get leaves me with a lot of questions. Personally, I fail to see what it really ‘adds’ to the previous album. He’d already thrown in one, in my opinion, cheap corona-based track, so I’m not entirely sure (other than business reasons) why this needs to be a whole new album. The only people losing out are the fans who want to buy it for the new tracks but have to buy the others for the third time.

Musically, it’s steady away. As the original version of the album suggested, what you see really is what you get. It’s better than a lot of Nashville country, but struggles to get out of second gear. It’s almost like someone is encouraging him to get as many arena-rockers ready as quickly as possible. I don’t mind the music, but I wouldn’t search it out personally. I like Luke Combs and I think he definitely brings something more genuine than a lot of artists, I can certainly see why people enjoy his music so much and why it’s so successful but other than beer-related drinking songs and big power ballads, it doesn’t quite grab me.

See you soon for What You Saw Was What You Got (Super Deluxe)?