He’s certainly no ‘one hit wonder’, that’s for sure, and he’s come a long way since his SteelDrivers and Jompson Brothers days – and his days writing songs for other artists years before that. His first solo album, Traveller, went triple platinum and From A Room: Volumes 1 & 2 earned him a CMA Award and Grammy Award respectively.

But it’s now been three years and the bar is set very high, so what does his latest offering, Starting Over, bring to the table?

The title track got me hooked back in August when it was released as a single. It’s simple, with a repetitive guitar riff and hardly any percussion. I reckon there’ll be many a fan picking up their guitars and heading to local open mic nights with this one. It’s an excellent, uplifting song exploring the idea of not caring where you are, as long as the right one is by your side. 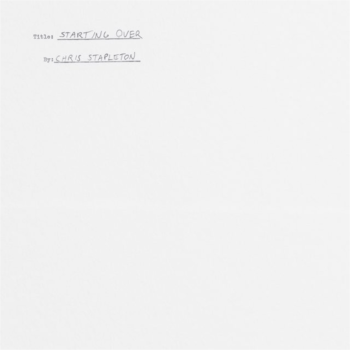 Years ago, my brother gave me a Gary Moore album and I was hooked on his blues sound for so long. Devil Always Made Me Think Twice took me right back there again. The combination of Stapleton’s smoky voice and blues guitar make this a great song. There’s a riff in there that’s almost reminiscent of Jimi Hendrix, too. We don’t need to revisit the “is it country?” debate. There’s no doubt he’s an amazing country singer. I mean, look at his hat….

There’s something about orchestral strings on a contemporary record that just gives it an edge. From Buddy Holly in the 50’s to the Beatles and beyond. After hearing Cold and hoping I one day get to see him perform it live with a full orchestra I also got to thinking that it would be awesome to see Chris Stapleton join the stable of singers lending their voice to a James Bond theme at some point. For now, though, this track is kind of the next best thing.

To sing about what people will think of you after you’re gone is pretty depressing, there’s no denying that. But, much like Luke Combs does in many of his songs, this one has a tinge of happiness to it that balances the whole thing out and makes it relatable. When I’m With You turns out to be a love song and reflects on being thankful for what he’s been given in life.

Time to crank up the volume and the tempo for Arkansas. I’m a sucker for country rock and this whet my appetite. It’s a shame more of the album isn’t like this but Stapleton is a clever man and he knows how to appeal to everyone. The Lynyrd Skynyrd-esque solo is great and, if the lyric, “Havin’ so much fun that it’s probably a little bit against the law” doesn’t have you smiling, well, you’ve probably never lived that lyric is all I can say.

I’m not sure if it’s quite wedding song material but this cover of John Fogerty’s Joy Of My Life will play the part of “Please dedicate this to my girlfriend…” on many a radio request show. With an arrangement similar to Starting Over you can enjoy the words and just be carried away on the light guitar underneath it. ‘tis a thing of beauty.

Hillbilly Blood has a light introduction but then drops into the darkness of his “Black coal soul and a mountain of pain” as a fugitive evades the law. It tells the tale of a killer on the run and doing what he needs just to survive. There’s a minute-long outro to provide an ending to the tale as you can imagine him disappearing over the horizon.

Now here’s a campfire song if ever I heard one. Maggie’s Song is the tale (tail?) of how they came by their dog after “Somebody left her in a shopping cart” and her life on the farm, chasing squirrels. Y’know, everything that dogs do until they can’t do it anymore. If you’ve ever owned a dog, then I’m certain you’ll be touched by this one.

Now then, if you like your music full of angst, hurt pride and lost love then this is the song for you. Everything about this song’s arrangement builds up the image of a man wandering around the house angry, upset, full of regret and crying with a glass in his hand, praying he, “…don’t open his eyes to a Whiskey Sunrise”

Fancy some twelve-bar blues? Then look no further. Worry B Gone, a cover of the legendary Guy Clark, sounds like the guy in the last song has managed to move on from the whiskey and decided drugs are the way forward. Its tempo might be a little energetic considering the topic but, I can’t say it’s a bad song at all. Don’t listen to this one too often. You might end up with the munchies….

With spoken verses and singing in the chorus, another Guy Clark cover, Old Friends sounds like the sort of thing your Grandad would tell you when you go fishing. A life lesson that will, hopefully, feel reflective. Who knows, when we consider how long it’s been since we have actually seen some of our friends, maybe this will make you pick up the phone and make a call.

Three years ago, Stephen Paddock opened fire on a crowd attending the Route 91 Harvest Country Music Festival. This song will touch a nerve, certainly if the listener is not in favour of the death penalty. Stapleton’s opinion is clear, however, claiming how the “Devil gonna Watch You Burn.” The song serves as a warning to any wannabe domestic terrorists, too. A chilling, angry song that Stapleton explained was “therapeutic” for him on a CBS This Morning Interview.

I’m unsure why the characters in this next song are spending the evening together. Maybe a clandestine affair? We hear the singer try and send his lover away while getting the impression they are trying to seduce him. I’ll let you listen to You Should Probably Leave for you to see how this turns out.

I did wonder what he meant when I heard Nashville, TN. Is this Stapleton’s swan song? It certainly sounds like he’s saying goodbye to the place. “So long, Nashville Tennessee, you can’t have what’s left of me” A little research unearthed that we’re not meant to take it so literally, thank goodness. But it was a nice track to complete the album before I hit play for the umpteenth time.

Personally, I struggled with this new album. I struggled to decide just which of the fourteen Country Blues tracks was my favourite. Damn that Mr Stapleton, he’s gone and done it again.

Overall, I think these songs range from good to great, although there may be one or two that I skip as time goes by. But, that said, there’s no doubt in my mind this is a modern-day classic that will be referred to as a benchmark in years to come.