Ward Davis’ story is much like many who have travelled to Nashville in search of country music success. He worked for years, only to realise he’d have to change to a more commercial sound in order to succeed. His work and dedication to the music he loved came through when he bagged a song on Willie Nelson and Merle Haggard’s Django and Jimmie record.

Since then, he’s had three songs on Cody Jinks’ Lifers LP and been on tour with the Texan. This year sees Davis release his own album, Black Cats and Crows, to add to his growing reputation as another one of country music’s ever popular outliers.

Ain’t Gonna Be the Day kicks things off in style, with a sound reminiscent to Jinks, he sings about not giving up and moving forward from loss. In this context, it’s a relationship, but it can easily be attributed to years trying to make it in Nashville. Big guitars and swirling pedal steel drive along this rocker, with Davis’ strong vocal leading the way.

The title track kicks off with a piano intro as the tempo slows down. It’s classic cowboy music, Davis laments his vices and does so with clever songwriting “the devil’s in the details and the details pave the way… God must have it in for me, why he only knows”. 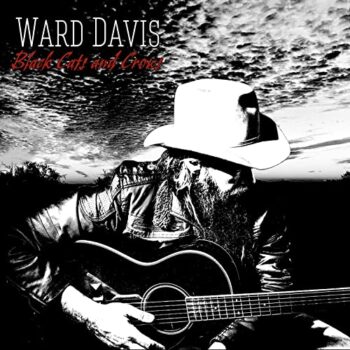 Threads is a similar tone but even more simplistic in its arrangement, to great effect. Simple piano and a pained overdubbed vocal with Davis’ lamenting voice make this song, with a beautiful fiddle solo to break it up.

Things take a harder edge with Sound of Chains. Big guitars and a driving rhythm tell that classic country prison song. It somewhat reminds me of Samm Riggs’ Angola’s Lament in its brooding and dark sound.

Davis channels a Jamey Johnson sound in Get to Work Whiskey. It’s a clever song that turns the old “I need to quit” story on its head, asking whiskey to stick around and get to work after a breakup. Whiskey songs have been done a million times, and it’s nice to see a fresh twist on the idea.

As mentioned earlier, Davis has a handful of writing credits for Cody Jinks and he treats us to his own take on Colorado here. A much more stripped-down version of the song than Jinks’ offering, the vocal and fiddle take centre stage on this one. I always love to see a songwriter cut their own take on a song we’ve heard before and Davis does his own tune justice here.

Another song that laments a love lost and relationship ended, Book of Matches paints a clear picture of the aftermath. Lighting a fire and burning those memories with “a book of matches and a bottle of wine”. It’s just a good, solid country heartbreak song, complete with that swirling pedal steel and a big twangy guitar. For country music purists, it’s heaven.

Heaven Had a Hand gives us a nice break from the sorrow and sees Davis thankful for finding the right person. A beautiful love song, he sings “I’m completely convinced heaven had a hand in you”. Again, the production is simple and that’s very much to the song’s gain. In a time where so much Nashville country is drenched in layers of guitars and other instruments, it’s nice to listen to something much simpler.

A lot of the record focuses on sorrow, love lost and love found, so Where I Learned to Live provides a misty eyed, sepia toned look back at Davis’ past and the place that he grew up. Again, it fits in the classic canon of country music songs but Davis does it well.

Papa and Momma brings us the story of an unfaithful no good father and a mother with “the weight of the world” on her shoulders. Its a good mid-tempo song where Davis once again shows off his songwriting chops and ability to tell a story.

We’re back to the piano-led ballads again on Lady Down on Love. This song really helps to show off Davis’ stylistic range. With vulnerability and warmth in his voice, he once again tries to tell us a different side to the usual country song, telling the story of a lonely woman seeking love and someone who won’t let her down. The twist of the song comes as you realise he was the man but betrayed her and how “she couldn’t live with a man she couldn’t trust”. A fantastic heart breaker of a tune.

Another strongly autobiographical song comes next in Nobody. Davis sings about the feeling of leaving home, of having “nothing left except your tears on the floor where you stand”. It’s a raw song that feels like Davis is opening up on his struggles with success, how he still feels like a nobody – “Sooner or later they’ll see, they don’t know a thing about me, ‘cos I fooled them alright into thinking that I’m worth a damn”. It’s a painful insight into the mind of Ward Davis and could do a lot of good for awareness of male mental health. I’d love to speak to Davis about this song and understand it more.

The penultimate song on the album is Good to Say Goodbye. It’s another reflective song where Davis thinks about leaving home and how painful it was, but how ultimately that pain was all worthwhile. An uplifting song where Davis is as honest as ever, analysing his decisions and the person he was and is now, aswell as those major turning points. “There’s a part of you that wants to stay right there where you are, but if you never walk away you won’t get very far” is a lyric for the dreamers. It’s not without tragedy, as his father dies at the end after he makes right all the fighting and the wrongs. A poignant and inspiring song.

This 14 song album wraps up with Good and Drunk. Like the last drink of a long night, Davis reflects on driving to the lawyer and how he “picked up a pen and signed my wife away”. It’s clear that separation and divorce are Davis’ demons and a lot of this record is spent trying to exhume them.

This record is a deeply personal album from Ward Davis, that actually delves deeper and deeper as it goes along. Fans of Jamey Johnson, Cody Jinks and songwriters from the Texas scene will love it. Lyrically, every song seems to just stretch slightly beyond the standard country song. A talented songwriter and performer, Ward Davis is going places fast.