Cody Jinks – Red Rocks Live: We take a listen to the Jinks big night at an iconic venue

When you think of legendary music venues around the world, you probably consider the Royal Albert Hall, Madison Square Garden and LA’s The Forum amongst others. Another venue that’s likely to be up there is Red Rocks Amphitheatre in Colorado. Set amongst stunning scenery out in the desert and nestled between two giant boulders, Red Rocks is the venue of dreams for many artists and fans (this one included!). It’s location makes it even more perfect for country music, and who better to bring his style of country music to Red Rocks but the amazing Cody Jinks.

After the release of critically acclaimed studio albums such as I’m Not the Devil and Lifers, followed by the 2018 double release of After the Fire and The Wanting, Jinks had firmly established himself. On July 13th 2019, Jinks headlined Red Rocks. A huge feat for an independent artist without the backing of the usual major labels and mainstream radio play, hell, he doesn’t even do interviews for the most part. At the end of 2020, a year with little-to-no live music, Jinks released Red Rocks Live, along with a video stream of the show to commemorate the occasion. 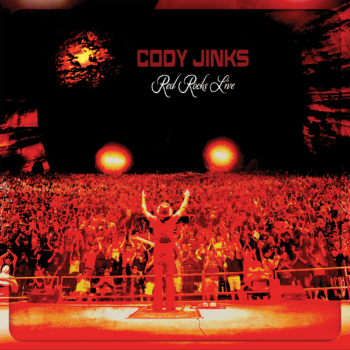 Kicking off with the twangy and upbeat Must Be the Whiskey, and rolling into a double whammy of Mamma Song and David from his album The Adobe Sessions, this record wastes no time in showing just how good Jinks’ brand of country music is and why he’s managed to bag Gold and Platinum records without the money and might of a major label behind him.

One thing that’s apparent from this album is the rawness of the recordings, edited with plenty of rowdy crowd noise at the beginning and end of the songs, the record has been put together to sound just as it should – like a honky tonk band stretching their legs in any venue from small bar to huge amphitheater. There’s no of the gloss or editing of some major label release live albums (see the truly horrific autotune that tore apart George Strait’s The Cowboy Rides Away) and it’s left as honest and raw as it was on the night. It’s not perfect, but that’s great, if I want perfect I’ll buy a studio album.

This album also ticks one of the most important boxes to me on a live album. It’s just one set from start to finish, there’s no jumping between different shows on a tour, so you get the full experience of the setlist Jinks has put together on the night, including the reactions of the crowd to their favourite songs – including a raucous intro to one of Jinks’ biggest hits I’m Not the Devil.

At 23 songs long, this is a mammoth of a set and live album release from Cody Jinks. It features Jinks’ mum on Mamma Song, as well as a special appearance from a man with a voice as big as the Colorado Desert, Paul Cauthen, on Big Last Name. It’s unfiltered and shows off a man who you can no longer call ‘under appreciated’, after all, just look at the number of fans adorning the front cover of this album.

A live album might seem like a simple thing, just hit record at the start of a show, right? However, they have been done badly before and no doubt will be again. With this recording, Cody Jinks very much gets it right. It’s one of the few times where you feel like you’re actually hearing the same show as the crowd who packed into Red Rocks that night. It shows Jinks and his band, the Tone Deaf Hippies, at their honky tonking finest.

It seems pertinent to kick off the year 2021 with a live music review. Hopefully Jinks and his contemporaries will be back on stages doing this within the next six months… and hopefully one of those stages will be in the UK in the future.