When you talk about ‘hot streaks’ in music, Aaron Watson must be one of the first names to come to mind. Ever since he smashed the Billboard charts with The Underdog in 2015, Aaron Watson has been producing consistently top-drawer records that have won acclaim from both critics and fans. Vaquero and Red Bandana both spanned 16 and 20 tracks respectively, without a filler song in sight. Needless to say, as an independent Texan artist, Watson has helped prove there’s still life (and major success) for those who aren’t suckling from the Music Row teet. 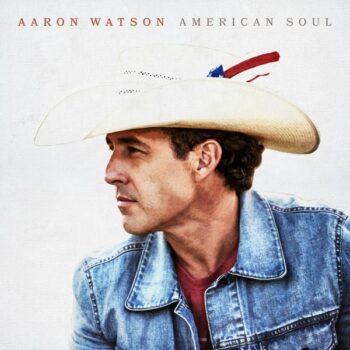 So, 2021 kicks off with American Soul, a release that seems as poignantly timed as any considering the current state of the news cycle. It’s also an album where the recording process was heavily influenced by the very same news cycle, Watson was in Nashville recording the album when the tornado hit last February, then the pandemic completely stopped production, before they finished the record off at Aaron’s house.

Don’t think for a minute that Aaron Watson is going to let the heartache and hardship of the last 12 months drag him down though. The album kicks off in typical toe-tapping Watson style with ‘Silverado Saturday Night’. It’s a classic Friday night, good time song and definitely a dose of positivity that we all need from our music.

Watson is known for being able to croon a love song with the best of them, just think of ‘That Look’ from The Underdog, and ‘Boots’ is another that will slot nicely into his playbook of dancehall slow dance tunes. Watson’s rich, warm vocals really come into their own on a song like this and carry this song along on a cloud in a dreamy and sexy way.

‘Whisper My Name’ is a song that Watson describes as being about the simpler times in life, like when he and his band were stuffed into a small van playing shows to no crowds around Texas, and how love felt so simple back then too. This is what Watson does so well in his music, he manages to create nostalgia that takes you to a particular time and place in the Lone Star State. Musically, it’s a real lighters-in-the-air chorus that’s sure to be a hit when the band get back on the road. It’s a dreamy American summer night and all the escapism we need.

Every great country artist should have a song about their dog, it kind of comes with the territory, Stapleton just did it with ‘Maggie’s Song’ on Starting Over, and Aaron Watson does it on American Soul with ‘Best Friend’. An emotional ode to his lost canine pal, Watson evokes emotional in the way that he does oh-so-well on his records. It’s almost reminiscent of ‘Riding with Red’ from Red Bandana in its soaring chorus and raw honesty.

‘Long Live Cowboys’ is a true slice of the upbeat, party-mode Aaron Watson and his band in full flight. The band regularly perform at rodeos all over Texas and in Las Vegas (see the live album Live at the World’s Biggest Rodeo Show if you didn’t already know this), and Watson wrote this song to be a celebration of the cowboys who keep the tradition that he loves and holds so dearly alive. As the man who proudly “puts the cowboy back into country music” he’s very much continuing to fly the flag on American Soul.

The song that Watson describes as “the coolest song on the album”, co-written with Monty Criswell, is ‘Stay’. It’s a funky, upbeat love song that feels autobiographical for Aaron as he sings about being on the road and playing shows but how the kiss of his wife “hits me like the desert rain”.

The album’s title track is Watson’s comment on the current state of his homeland. Ever the optimist, he tries to channel that American soul that makes his country great and move away from the political potshots people are ever-increasingly taking at each other. It’s a rousing song that serves to remind us (including those of us outside America) of exactly what America should be about. Not the things we’ve seen on our news channels recently…

It’s rare to see the usually positive-minded Aaron Watson write a song that embraces a little bit of down-in-the-dumps misery, but that’s exactly what he does in this classic country breakup song ‘Out of My Misery’. Lyrically, it’s got that classic ‘just one more night’ message after a breakup as Watson sings “before you leave drink all my wine, steal my covers one last time”.

‘Touchdown Town’ was one of the first songs released from American Soul and it’s another All-American roof raiser. It’s surely another one that’ll be a big part of Watson’s live set when he’s back out on the road. Evoking all the nostalgia and imagery of an American Friday night, it’s just another part of that American Soul he’s trying to remind people of on this record. Big singalong choruses all round here!

The record ends on a subject that’s close to Watson’s heart in ‘Dog Tags’. Aaron is a big supporter of army veterans, his father being injured in action, and ‘Dog Tags’ rounds off American Soul by gently nodding the listener in the direction of the things that do matter and should help pull people together. In a world full of divisive politicians, Watson hopes that those wearing dog tags will serve as a reminder of how people should act.

American Soul is another stellar release from Aaron Watson. His gold streak since The Underdog really hasn’t shown any signs of waning, and American Soul adds another great collection of songs to that ever growing list. At half the number of songs as his last release, the album benefits from being a little more focused. Whether this length was down to planning or circumstance, I can’t be sure, but you can tell that Watson has taken the time to put together a collection of songs that he hopes will revive that American Soul we’re watching suffer right now. If there’s one man who can do it, it’s him.