Jacob Bryant Interview: We chat ahead of the U.K release of Practice What I Preach

Prior to the U.K. release of Practice What I Preach this week with five exclusive new tracks, Jacob took a little time out from preparing to go on stage later that day at the Troubadour Theatre in Nashville.

SSC – Hey Jacob, thanks for chatting. How are you doing?

JB – I’m good man. Just kinda recovering a little bit. We haven’t been on the tour bus very much this year due to the pandemic, but we finally had a show this weekend, so we came up a couple days early to see some friends and do rehearsals and stuff. 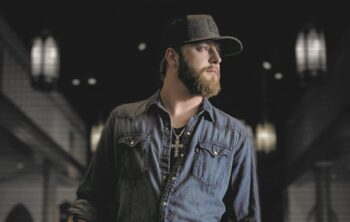 SSC – For those of our readers that don’t know you or your music, can you introduce yourself?

JB – Sure. Well, I grew up in the North Georgia mountains, way out in the country on one of those three-mile dirt roads. Wasn’t really a whole lot to do, y’know. No bowling alleys or malls or anything close by or whatever. We just played music on the porch with my Grandparents in a bluegrass band. It’s kinda how I got started in music. As I grew up, I got into Christian Rock and sort of Southern Rock leaning country.

I ended up being a Praise and Worship leader for a while then I moved away from the Christian Rock scene and into the Country / Rock hybrid kinda thing and that’s what I’ve been touring with and doing the last ten years or so.

I finally started doing it full time in 2014 and released my self-titled EP then. It’s kinda been an uphill grind ever since, man. One of those things you get a little bit addicted to. You get a little bit of success, that awesome feeling to get on stage and interact with those fans and feel something that you wrote touched somebody in the crowd or helped them get through the day, uplifted their spirits.

SSC – How much has the pandemic affected you and touring?

JB – Extremely. We’ve gone from being set to do 150 shows and we did 30 and we were lucky to be able to do that. They were half capacity venues n’ stuff, instead of the amphitheatres and bigger shows with Luke Combs, really big stuff, and then we ended up with me and my acoustic on a bar stool to 150 people. I saw it as a blessing though, since I realised it can all go away in a minute. It kinda humbles you, y’know? I actually strapped on a tool belt and went back building houses in April 2020. A man’s gotta do what a man’s gotta do to take care of his family.

SSC – I’ve been listening to the album and I’ve got a couple favourites. Pour Whiskey On My Grave is awesome.

JB – Thanks man. That’s one of my favourites, too. Unfortunately, I didn’t write it, but after my mom passed away, I always go to her grave every year and I pour out a beer and sit ‘n drink a beer with her. So, the first time I heard that in a songwriter’s round here in Nashville I knew that I had to cut it. I felt like it was written for me. I was lucky enough to make friends with the guy that wrote it and we’ve now written about twenty-something songs together.

SSC – These five new tunes then; were they written originally to go on the album or are they brand new?

JB – It wasn’t necessarily a thing of “Let’s write five new songs” or whatever. For instance, Save My Soul was released here, way back, and I felt it never really got the life it deserved. That and, because I’m Country and Rock and that one being written with Jon Lawhorn from Black Stone Cherry, I just felt it would be a good fit for the deluxe edition.

If you listen to Pour Whiskey or More Than One Year, it’s rough around the edges rock with a country singer, but Bring You Back is another one of those, y’know, songs to my Mom. Although the video is portrayed as more a couple where the wife passes away. But the reason I cut it was more because of the connection between me and my Mom.

I wanted to show a bit of a soft side, man. I’m a little bit of a sentimentalist. I was definitely a Momma’s boy growing up and I’m not afraid to show that.

SSC – I’ve learned that Tell Me is on karaoke. I can’t wait to belt that out.

JB – I wrote that with Wyatt (McCubbin) and it reminds me of relationships and the past. It’s like “Don’t waste my time. Don’t act like we’re still in love. Just tell me that it’s over”

I mean they were all put on there for different reasons. Don’t You Let Me Down Now was specifically recorded for the U.K. album. I’m sure when you hear it you can tell we took a lot of influence from Tom Petty. My manager, Jeff (Canton) is a huge Tom Petty fan. I’d never really pushed myself to do something leaning more to Classic Rock and it gave us the chance for you guys to hear something new.

SSC – Your sound seems very influenced by sort of Lynyrd Skynyrd I feel. Like, the Last Of A Dying Breed album.

JB – The stuff that I lean to is more the ones that people don’t know, like I Need You and I wanna mention Travis Tritt. He’s probably one of my favourite country artists along with Keith Whitley and George Jones and he’s from Georgia too so I gotta love him. He has a voice that, as soon as he opens his mouth, you know for a fact that’s Travis Tritt.

SSC – Signing with Snakefarm Records. Tell us about that.

JB – Yeah, that’s gonna be really cool, man. They’re opening up the door to touring the U.K. and broaden our audience by a massive scale from the power of streaming and a huge playlist. We’re super happy and really blessed to partner up with them and we can’t wait to get this thing out.

I’m always getting messages from Australia, from London, from Germany, from random places and they’re like “Man, we love you over here, when are you coming over?” I just felt like I was doing them a dis-service by not doing something for them.

SSC – You’re in good company at Snakefarm, obviously. George Strait, Caylee Hammack, Eric Church of course. He was due to visit last year but we know what happened. Have you ever been to the U.K. to play?

JB – No, I haven’t. The only international stuff I’ve done was in Brazil. I met some guys down there and became friends with them but that’s the only international travel I’ve done, musically. So that’s why I’m super excited to get over there. Check out new things, new venues and meet new fans, y’know? One, because I think my music connects and, two, I’ve never been there, and I like to travel and see new things. I just want to broaden my horizons a bit. We’re looking to possibly touring in Canada and maybe going back to Brazil, too.

SSC – I gather the album nearly never happened at all. What went on there?

JB – Yeah, my producer, Jesse Triplett that plays in Collective Soul, called and told me I needed to sit down. I was like, “Why?” He said they came off a short leg of the tour and when they came home and opened the front door, he saw everything in his house was vandalised with spray paint all over it; the TV, his guitars, everything. The only thing they stole was his computer and hard drive. All of my masters were on those hard drives. Two years’ work, gone. Thank God he had bounced it down into the cloud. I mean it kinda ended up being a cool story, but it wasn’t cool at the time.

SSC – So, 5th February is launch date. Will there be any vinyl, or just downloads?

JB – We already have vinyl being shipped. Dante (Bonutto- Snakefarm Records) was telling us it’s pretty big over there. We’re seeing a little resurgence over here in the U.S. but I’m sure they’ll do well in the U.K. It’ll give you something you can hang on your wall later if you wanted to.

SSC – Well, thanks for speaking with us and we look forward to seeing you sometime in the future.

JB – I’ll get over there somehow, man. Even if it’s just me on my own. Thanks, man. God Bless you.

Jacob Bryant will release the Deluxe version of ‘Practice What I Preach’ this Friday (5th February 2021) with 5 new and exclusive U.K. Tracks.

You can read our review of the album here. 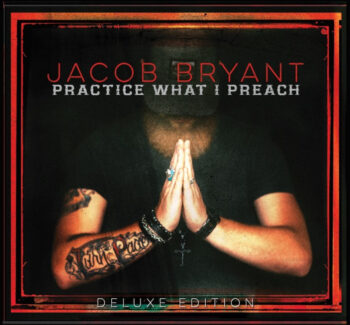