Multi-Platinum singer/ songwriter Kip Moore will release WILD WORLD DELUXE, an extended version of his most recent release, on Friday 12th February 2021. Offering four new tracks, this new issue of Moore’s fourth studio album follows the critical response and fervent fan demand following the release of WILD WORLD earlier this year. Upon its release critics were quick to note how “especially vital; occasionally, even rare” (Esquire) the collection is, as well as praise Moore for “digging deeper than ever before… his most honest music yet” (Entertainment Tonight), as the record has garnered over 193 million streams worldwide.

Critics have praised Moore as he “probes growth and honesty” (American Songwriter) and offers a “much needed escape” (Forbes) with his “mature yet fresh blend of soaring 80’s heartland and contemporary country depth” (Classic Rock). Moore recently released the first new track from the Deluxe version, Don’t Go Changing, with an impactful music video. The video served as a call to action to fans to help support and donate to Music Venue Alliance Nashville, whose aim is to help independent music venues working to survive during the pandemic. Meanwhile, How High is a romantic track in true Kip Moore fashion with anthemic guitar chords underpinned by a punchy, inistent beat.

Of the album, Moore said, “Most of the songs that came about from this record were during a round of touring around 2018 when I found myself really broken down in a lot of ways – physically, spiritually, emotionally. There was a constant search for simplicity. I found myself departed from my faith; I was searching. You sense that with so much of this record, you sense that search for peace. It’s an elusive thing, but I’m trying to grab a hold of it all throughout this record.”

To celebrate the release Moore also announced a special concert event, WILD WORLD DELUXE: LIVE AT THE RYMAN set for release day (12/02). Taking place at the Ryman Auditorium in Nashville, TN at 2am GMT / 8pm CT, fans can purchase a limited number of in-person tickets for the socially-distanced show, or tickets to the global livestream event, at ryman.com/event/kip-moore/. The show will also benefit ACM Lifting Lives, with $1 from every ticket sold being donated to the cause. Livestreaming tickets bought before the day of the show are sold at a discount, so get yours now! 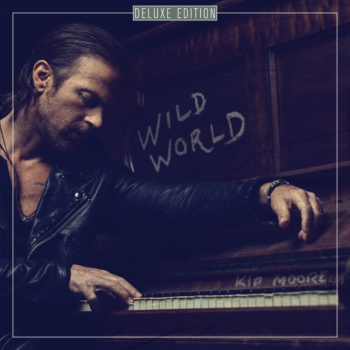