With a visit to The Long Road Festival on the horizon, Kyle Daniel talks new opportunities and uncharted territories 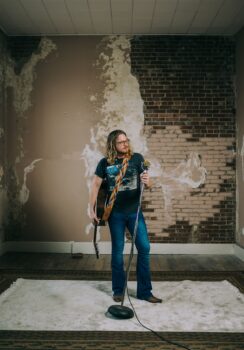 It’s been a pretty impressive couple of weeks for Kyle Daniel. From launching a new single with C2C Attendees group favourite Max Lewis for music charity Electric Umbrella, to working hard on his socials and building momentum for Kentucky Gold – his much-anticipated first full-length album – the man from Bowling Green has been busy.

With plans currently going full steam ahead for an appearance at The Long Road festival, he’s also making a big impression on UK fans. Six Shooter Country’s Alison Dewar hooked up with him for a quick chat and discovered that this is a man who certainly knows how to work a crowd – even if they are well over 4,000 miles away.

When Country2Country recently treated us to online highlights of C2C Berlin 2020, we saw you play God Bless America (Damn Rock N’Roll) with Seth (Rentfrow) and the reaction from the C2C Attendees Facebook group was phenomenal.
Yeah, you know, when we initially came over for Country Music Week (2019) we played Hamburg, Berlin and Munich and we had made a little bit of a splash. I was excited to see what a bigger opportunity would look like there and they just welcomed us with open arms. And the currywurst doesn’t hurt – I definitely got turned on to that while we were there, so I could get used to Germany.

At C2C Berlin, we gave it everything we had. I told Seth before we did the showcase set that man, we really need to turn it up a notch, let’s give it all we’ve got – not that we don’t always, but we had 6 or 7 shows there throughout the weekend and obviously that wears on your voice. I wouldn’t say I took it easy, but I knew I had to save something for that specific set – and then we started hammering down on the party later (laughter).

I love that you jumped on the Attendees’ page and played some music at the ‘after show’ zoom party! Do you feel you have to work harder at this time to continue to build the fan base?
I don’t feel as though I have to, I have kind of stayed in the shadows and I’m still figuring it out. I am so programmed to show up to a venue and hope the sound man knows what to do – I’m not programmed to jump on my computer and run through a box that runs through a zoom recorder where I’m checking levels and things….

I know how I want it to sound in my ear, so it’s been a real learning curve and I stayed completely off that stuff when we first started lockdown. I did a few little livestream things but realistically that was so awkward and it’s still very awkward, but I felt this was a prime opportunity because I didn’t get to see the folks in 2020 or C2C 2021.

It was like how many consolation prizes can you give the UK fans, so I thought ‘f**k it’ I’m going to show up to their livestream and play some songs. I’ve really tried to position myself so that when it is the green light and it’s ‘go’ time again I’m full force ahead with everything I need.

I’m sure when you do come back to the UK, you won’t be short of drinking companions.
Yeah right, that’ll be good. During this time, I can count on one hand the amount of times I’ve been like…let’s go for a drink. I’ve been very focused on cutting the record. Not to the point that I’m squeezing the life out of what I do, I’m getting my share fair of play time and I think that’s important. I create so much that I need the downtime to play 18 holes of golf or sit in the woods and go deer hunting or whatever.

Which moves us neatly onto The Long Road. Baylen has set the bar really high in terms of artists and I wonder if, at a time when some of the bigger names have a lot to catch up on Stateside, you see this as an opportunity that could open more doors over here.
Yeah, I do. I think that’s a definite win. Right now, I think all of us around the world have to take our wins where we can, we’re all stepping into uncharted territory together and sure, the folks that are playing The Long Road may be some of the first to make the trip.

And for me, it’s a no-brainer at this point, like I have to come over because the fan base is so engaging and hungry for what we’ve been doing and they’re yet to see it with a full band.

Are you thinking more than just The Long Road?
There’s a couple of discussions going on that I feel good about, we’re looking to add things around it and that could be really cool. I can’t really say much more right now but I see this time and cost as an investment in my growth for the future.

It’s not opening for Eric Church to 35,000 people at the O2, but it’s maybe a 1,500 seat room that goes down to 60% capacity and those people who are super fans that you’re able to engage with on a more intimate level.

The one really awesome thing is now we have an opportunity to come back with a little bit more of a fire behind us, not only with the record but the demand, people are excited for us to come over there and I think that excitement is only growing for live music altogether.

I think there’s cool opportunities for us all and long and short of it…I’m excited to kinda see what I may be able to benefit from.

What news of your long-awaited first full-length album, Kentucky Gold? You’ve been teasing fans with a weekly social media experiment to sign up and share to get access to a different track every week. How’s that going?
The socials have been good but I’ve been battling the algorithms of Facebook, Instagram and TikTok, I just want to get to the fans and be like ‘hey, this is what’s going on…you guys can listen to the record with me every Friday’ so come on board.

I’m trying to navigate it all because it’s an incentive for the fans to hear the music and for me to grow my socials and spread the word about what this is.

I have put so much heart and gut into this thing that I truly feel this could lay seeds for the roots of my career. I think this is the statement that people have been waiting for me to make. Man…if I can put the right people together and get some firepower behind me I think this record is gonna do something.

What’s your take on how gigs are going to move forward over the next few months?
We’re starting to have preliminary discussions about the ‘what ifs’ – what if we’re available to really let this thing fly come 4th July. They’re saying here you’ll be able to get to get together with family and watch fireworks and grill out, that’s the American dream this year.

If it does open up, I think for August, September, October, November you’re going to see a totally different swing. People usually quit touring about the second week in December, but I think you’ll see people still touring 2-3 days before Christmas just to try to get it going. Then they usually take half or all of January off, but it’s tough to kind of hedge your bets on anything with all the unknowns.

I think at some point as a world we have to get back to living our lives the way we’re accustomed to. Overall, we’ve been patiently impatient – now I think everybody is ready to go back and willing to do what it takes to get closer to that.

One of the songs on the new album is Divided We Are and what more of a sign of the times kind of song could you ask for, especially in America right now, blue v red, black v white, Democrats v Republicans, you wear a mask or you don’t wear a mask, you tour or you don’t tour.

I refuse to take a side but it’s a tough time to stay in the middle – I want to tour but I don’t want people to look at me and go he’s this way, or he believes this, or he is a die-hard this or that…

I feel I’ve learned a lot about myself and things I needed to work on in my life and I hope to come out of this a better person. I hope we can all adapt and be better, maybe that division is just behind this (online) screen right now and when we do get together we are able to get a little bit closer. There’s a little more empathy and understanding in the world that we’ve been through some s**t together that should draw us closer just as any relationship. Wishful thinking… 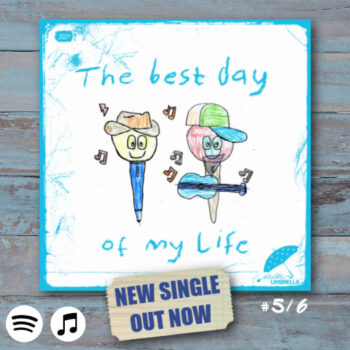 Last week, music charity Electric Umbrella (EU) released the song BEST DAY OF MY LIFE featuring lead vocals by Kyle and Max Lewis, together with a fabulous video. The song was co-written by Kyle with EU’s Tom Billington and the EU team and is part of a new EU album which launches on March 26.

Kyle has talked previously about how passionate he is in helping children with learning disabilities and, with the single now completed – and played by Baylen Leonard on his radio show to mark World Down Syndrome Day – he says:
The single is great, I’m so blessed to be able to have been connected with it. When EU approached me, I was like ‘absolutely’ I want in. It’s such an honour to be a part of and I just think this may be one of the coolest things I have ever done musically. Tom is so unbelievably talented, he put the entire production together, I went to my buddy’s house and sang it down in his garage and that’s what it is. Bob Harris liked and retweeted it, so it’s very nice to have that little tip of the hat.

And a thrilled Max, who stars alongside Kyle in the video and helped design the cover artwork, said: “I never had a dream come true like working with Kyle and Electric Umbrella on this song.”