Excitement is building for Josh Turner fans as this Friday (June 25) sees the release of a special 15th Anniversary Deluxe Edition of his iconic album, Your Man. Available in the UK via Snakefarm Records, it includes three bonus live recordings of his Number 1 hit songs, Your Man, Would You Go With Me, and fan favourite Me and God. 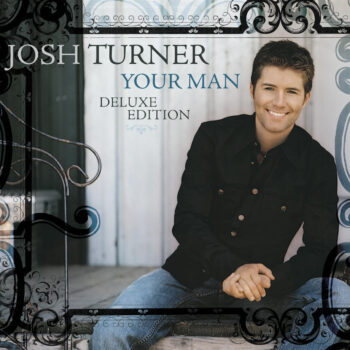 On Thursday (June 24), Turner is hosting a special livestream launch event at 7pm US Central Time, assuring his UK and European fans that – given it will be in the early hours of Friday morning in our time zone – the session will be available to watch online afterwards. (Details of how to view the event at the end of this article).

The title track, Your Man, which was written by Chris Stapleton, Chris DuBois, and Jace Everett, has become one of Turner’s many trademark hits. And celebrating its success, his wife Jennifer, who starred as his love interest in the official video 15 years ago, surprised her husband on stage in Nashville earlier this year with the news that the hit song is officially RIAA-certified Triple Platinum.

Turner talks to Six Shooter’s Alison Dewar about choosing the new live tracks, playing back at the Grand Ole Opry in front of a capacity crowd, and how his lockdown song became a technological first for him.

Josh, thank you for making time to talk to us. When you recorded Your Man all those years ago, did you ever dream it would become such an important album for you?
I didn’t really know what to expect. When I first signed my record deal, all I heard in the record industry was about the sophomore curse. I tried not to think about it, not everybody gets to make a second record.

After my first album (Long Black Train) went platinum, I felt it was a really good start. When I went to make the second one, it was the first time I had worked with Frank Rogers as a producer, I had a lot of great songs, a lot of great musicians and I knew my way around the studio better. I had a confidence level that was not there on the first record, and it was probably a little more mainstream and commercial. We tried to make a departure from the foundation that we had laid by Long Black Train to show the versatility I had as an artist and I think that is why it was so successful.

Knowing now about its success, if you could step back in time, what advice would you have given yourself ?
The first thing is probably just try to enjoy all of it. I think I tried to do that then, when you don’t know what is coming round the corner you take it one day at a time – and I think that’s the best way. Had I known, I would have probably taken it in a whole lot more.

I know you’ve said that Jennifer was pregnant with Hampton at the same time Your Man became your first number one album and single. Do you almost feel this album was like another child?
Yeah, in some ways. It reminded me that I worked very hard and I fought for it, so it can feel like a child. All of these records are my babies…somebody said yesterday they are like a time stamp on my life and that is true. It shows where I was as an artist during that time in my life.

You’ve added the three live bonus tracks featuring your number one hits on the new deluxe album. How on earth did you decide which concerts to record, what made them so special?
The live recordings were based on the connection that I had with the audience that night. It may not have been the best vocal performance from me, or the best band, or the best venue, but everything was about the connection with the audience.

It had to have had that heart and that feel…it’s not about always looking for perfection but about how it is for you and the emotion it stirs up.

With Me and God, the live version is a totally different arrangement than the one in the studio. It was a touch of genius, I was on the road and I had that arrangement come to me. I worked through it with the band, we tried it for a while and ended up recording it. It shows a contrast, how the same song can be played in totally different ways.

You’re hosting an online launch party for fans and taking questions.
Yeah, we’ll be telling the story of the album, it should be a lot of fun and you should be able to watch it online afterwards too.

Last Saturday, you were part of the Opry Livestream performance, how did it feel to be back on that iconic stage with a capacity crowd?
We hadn’t played at the Opry since October 2020, when they allowed about 500 people, so to be there with a full crowd and the fact Opry Livestream is on the radio, the TV and on the internet – to be able to reach that many people within a short amount of time, to tell them what is going on in your career and your life – it was very special.

When we spoke last year, you admitted you were still trying to embrace social media, yet you’ve just had a real “first” by taking a song (Hindsights 2020) that you wrote in January, but never recorded and you’ve put it straight out online to your fans. How was that?
Oh yeah, there was a lot of trepidation! It was about documenting what we when through last year, how rough it was for everybody and saying here we are in 2021, looking back on a rough time in our lives and how we had to pull together and get through it together.

I guess we have my wife to thank or blame for that, when she heard the title, she said you need to put it out there. It was the first time I’d ever released an original song of mine online without recording it.

That’s the perfect way to wrap up, thank you for your time Josh and we look forward to the new album.

The 15th Anniversary Your Man Deluxe Edition, RIAA-certified Triple Platinum album, will be available on June 25 via Snakefarm Records in the UK.

If you would like to attend Josh Turner’s online album release event on Thursday 24th June at 7pm CT time, just register at THIS LINK.