Midland – The Last Resort EP Review: The Trio Take a Turn for the Mainstream, But Is It a Last Resort for the Band?

Since they arrived on the scene with their debut album On the Rocks back in 2017, we’ve seen a steady stream of music from Midland. Another studio album, the highly polished and somewhat glossy Let it Roll, plus their Live from the Palomino record and collection of early recordings on The Sonic Ranch, showed that the band were keen to make hay while the sun shined. Their throwback 70s dive bar band style made them a lot of friends along the way,  but one question always remained – how long could the schtick last?

Working as they do, so closely with pop country behemoths such as Shane McAnally and Josh Osborne, always felt like a safety blanket. McAnally and Osborne could help them dial in the sound they were looking for, but still I asked myself – where would they go next? In this 5 song EP, The Last Resort, it feels like a lot of those questions are answered. 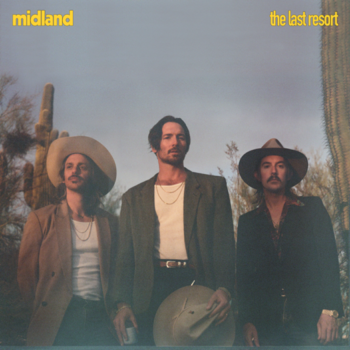 The lead single from the project, Sunrise Tells the Story, is a little unremarkable. In fact, my first thought was how ‘mainstream country’ the song sounded. Sure, Mark Wystrach’s voice gives it that typically Midland feel, but the whole thing sounds like the band are missing their trademark swagger. The swirl of pedal style around a mid tempo rhythm feels like anything you’d hear on country radio. It’s not a bad song, but we’ve become accustomed to a big slap across the face from Midland getting our attention.

That’s not to say there aren’t moments on this record that get your toes tapping. Two to Two Step is reminiscent of early Thomas Rhett, it’s got a big chorus and a footstomping rhythm, but it doesn’t feel like it has that genuine ‘Midland’ sound we’re used to. What is that ‘Midland sound’, well it’s hard to explain, but it’s different to everything else at the moment or really that we’ve seen in the last 20 years, but this isn’t. Maybe they’re changing and maturing, or maybe they’re embracing the more mainstream sound that’ll guarantee them a little more radio play.

Take Her Off Your Hands does pull Midland back into that familiar setting of the smoky, whiskey-soaked barroom. It feels like a comfort zone to the band (that’s not a bad thing, after all, that’s where they cut their teeth). It’s easy listening. The same can be said for EP closer Adios Cowboy, it’s mid-tempo heartbreak Midland doing their thing. Nothing that’ll make you sit up in your chair but it makes for easy listening. Maybe that’s the way Midland are developing, the easy-listening band ditching the 70s style and big shiny production that Let It Roll had in abundance.

The real gem of the EP is the opener. And Then Some is Midland growing into themselves a little more. Sure, it’s much more mainstream than we’ve ever been used to from Midland, but it’s got a chorus the size of the Texas sky. They’ve nailed the breakup song here, something they’ve had a many a stab at over the years. Maybe Midland are evolving. An EP is often a worry, are the label trying to fulfil their releases early and pack them off? Here, it feels like the band are trying to keep fans interested and show off how they’re developing and growing. It’ll be interesting to see what the next full length record brings.

One thought on “Midland – The Last Resort EP Review”