Tim Prottey-Jones, self-confessed workaholic and lover of the art of collaboration, talks about going solo for the first time

After the relative quiet of lockdown, it’s a busy time for the multi-talented Tim Prottey-Jones. A few days ago he released his latest single Fire (of which more later) and this weekend he takes to the stage at Buckle & Boots. As a former founding member of The Wandering Hearts, he has played such legendary venues as the Bluebird Café and The Grand Ole Opry, and shared the stage with the likes of Chris Stapleton and Marty Stuart but, when we caught up with him, he was fresh from his solo debut at Essex’s Tennessee Fields Festival.

The singer, songwriter, producer, actor, musician, radio host (need I go on) is revelling in the opportunity to get out and about again – not just playing his own new music but very much flying the flag for UK country music. Here, he talks to Six Shooter’s Alison Dewar about having nerves before performing as a solo artist, how becoming a father changed him, and just some of the names he tips for future success. 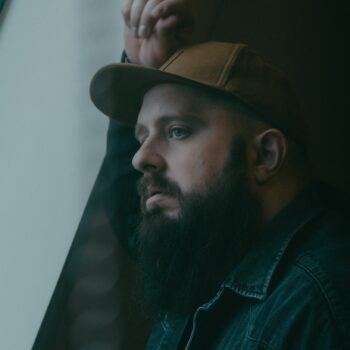 Tim, thanks for talking to us. How did that feel, stepping out on your own at Tennessee Fields – new music and no-one to keep you company on stage?

It has been a massive deal, I launched my solo career during lockdown so this has been the first experience of playing these songs. I’ve lived them for a year-and-a-half and although I’ve put them out on Spotify, I don’t know what people think about them. I was very nervous, but the comforting thing is I only had myself to blame if it goes wrong (AD: trust me it didn’t).

In a band, you’re not in control, but this time it was just me and a guitar. The crowd got really excited which was wonderful, I’ve got some full band shows coming up and I’m holding back some of the songs for those.

You started the TF performance with your new single Fire, which came out on July 23. It’s described as a ‘feelgood track for fans of Lady A’ and is all about never giving up and breathing life into your passion, which seems quite telling – we’ll talk more about that theme later, but first tell me about writing the song.

I’d had Fire in my head for quite a while, but it didn’t really form into a song until this year. It mixes my love of Lady A and country pop. I love the production, I wanted a piano-led song, it took me back to my roots and it was nice to do that. The opening chords were the hooks and I sang the first two lines for about three months until more came to me. It’s a song of three choruses, they were all strong so I put them all in. I’m hoping it will go down well on radio and at live shows, I am extremely proud of it.

Another track from your TF set was your last single, Until I Do (written by top Nashville songwriter Jeff Cohen alongside Jamie Floyd and Steven McMorran). You teamed up with Stephanie Quayle for the duet via a virtual collaboration from Nashville. How did that come about?

Jeff has been extremely good to me, we’ve written four songs together in the last couple of months and I’ll put them out at some point. With this one, Jeff sent me the song, I had Stephanie as top of my duet wish list and it was really exciting when it came together with me here and her in Nashville – we’ll definitely sing it together at some point.

Bryn (Tim’s little boy) was in the audience to watch the show. One of the songs you played was about trying for a baby, so how special was that?

This was the first time he had really seen me play live. He had only ever been to a show of mine at the end of 2018 when I was in the band, and he slept through the entire thing. He has his own cute names for the songs – he calls them his Bryn Jones songs and he always asks for them. It’s really interesting to see how he reacts, he seems to recognise each of them and dances along.

As we’ve already said, Fire alludes to following your passions. You’ve been through some big changes, becoming a Dad, leaving The Wandering Hearts and then you founded The Fatherline…

Yes, bands were all I had known, but with the birth of Bryn there were a lot of life changes. Looking back at what I achieved with the band, I am extremely proud of them all – being part of that was wonderful and who’s to say you can’t only have that happen once.

The Fatherline came about fairly soon after The Wandering Hearts, for me it was very much about wanting to write a lot of things down but not being ready then to do things under my own name as a solo artist, I had never done that before.

The Fatherline hasn’t split up but when lockdown happened it taught me a lot of things. You ask yourself ‘do I want to do this anymore – you’re not a spring chicken’, and the answer was yes, I do. Those experiences made me want to do this more than ever – I love rock and pop and country music.

Now I want to do it again on my own.

How do you juggle everything?

I like to challenge myself constantly, I’m a workaholic and I don’t like sitting still, although I don’t want it to interfere with my family life.

The radio show (on Chris Country) probably wouldn’t have happened without lockdown. They needed someone to record at home in the pandemic and I just went to do my bit. It was something I wanted to do many years ago, it combines everything I want to do and gives me the chance to push the genre forward.

I have loved being in bands, this is the thing (going solo) that is odd for me – I love collaborating, I’m intrigued with the art form of writing, I’ve being doing some great writing sessions and being at Tennessee Fields, I’ve been meeting artists for the first time who I’ve done online collaborations with.

I want to write and produce for other pop and country artists and push my solo career. I’m massively proud of my songs and I have something I think people will enjoy.

There are very few solo male country singers here and, while The Shires do wonderful things, the country scene here needs more than one band.

On my radio show, I have an abundance of material from UK female country artists and I have to spread them out, which is the opposite to the US, where they play a lot less female artists on the radio.

Poppy Fardell (who sang with Jake Morrell at TF) is a wonderful artist in her own right; Jake loves the country pop scene but his heart is still in country; Steve Balsamo – he’s incredible; Robbie Cavanagh; Lauren Housley; Joe Martin; Vicki Manser – they are all great.

It’s also about supporting upcoming songwriters. I met some brilliant songwriters this morning and I only knew one of them.

I was like ‘why not send me your stuff’ because I want to produce some of those artists – the production is not always good enough and there is nothing worse than a terrific song recorded badly.

I really want to be at the forefront of that movement of bringing new artists along – there is room for everyone.

Tim, thank you for your time and all the very best for the upcoming gigs.

If you don’t manage to catch Tim at Buckle & Boots, he will be hosting the Songwriter’s Carousel at The British Country Music Festival September 3-5 at The Winter Gardens, Blackpool; playing Country In The Afternoon at the Half Moon in Putney September 11-12; and Americana Calling at The Asylum Venue in Birmingham on September 17. 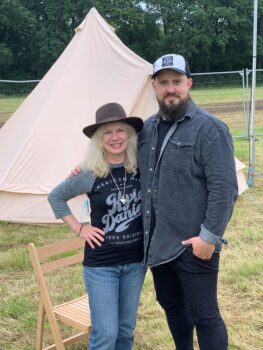