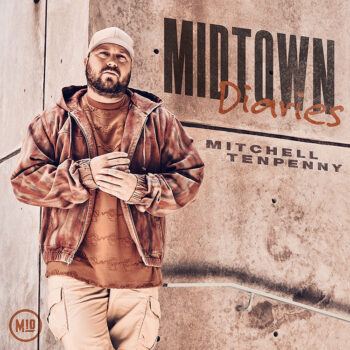 Riser House/Columbia Nashville artist Mitchell Tenpenny released his Midtown Diaries EP on Friday, 10 September. Mitchell produced the eight-song project along with Jordan M. Schmidt and co-wrote all the tracks including his current radio single Truth About You. The single became the largest streaming debut of his career garnering 2.5 million streams in its first three days of release which has now swelled to 16.5 million total on-demand streams to date. Mitchell’s total career on-demand streams has reached more than one Billion. Get the EP HERE.

“I spent all of my time during the pandemic writing songs,” said Mitchell. “I always write about my interactions with people or interactions my co-writers are having. But during the long quarantine time and being off the road, I had to channel my past and allow myself to bring out some of my vulnerabilities. I think this EP includes some of the best songs I’ve ever written.”

Mitchell talked to Billboard Magazine about fulfilling a lifelong dream with his upcoming headline show at the Ryman Auditorium and his passion for songwriting being built on inspiration from his late grandmother Donna Hilley, a former CEO of Sony/ ATV Nashville. “I love writing music more than anything in this world,” Mitchell told the magazine. He recalled, “I was at my grandmother’s office one time as a kid, and I didn’t know what she did—I just knew she was in the music industry. They (songwriters Curly Putman and Bobby Braddock) were up there having a meeting with her, and she told me, ‘Mitchell, these are the guys that wrote “He Stopped Loving Her Today.”’ It’s like everything just started firing creatively at that point. And growing up, I got to meet a lot of my writing heroes.”

The Midtown Diaries album title is named after an area in downtown Nashville just off Music Row, referred to as Midtown. It’s a place Mitchell spent many nights before his record deal playing some of the bars and clubs or in more recent years hanging out with friends after songwriting sessions on the Row. It’s through those times where he experienced the stories that became memories and framed the topics for many of these songs.

One of those hangout places was Bobby’s Idle Hour where he filmed a portion of the music video for current single Truth About You. Mitchell debuted the song for television audiences with a performance on KTLA’s “Music Fest Fridays.”

Lyric videos for two additional songs are available now: ‘I Can’t Love You Anymore’  and  ‘She Hates Me Too.’