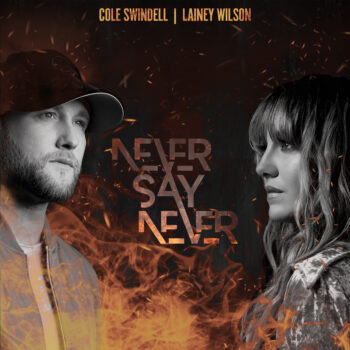 Swindell co-wrote the duet with Jessi Alexander and Chase McGill. Never Say Never is the Georgia native’s 12th career single and the follow-up radio single to his back-to-back No. 1 hits Love You Too Late and most recently his milestone multi-week, 10th career No. 1 hit Single Saturday Night, which has already logged over 245 million streams globally. Never Say Never is also the follow-up single to Wilson’s U.S. No. 1 smash hit Things A Man Oughta Know, which is still streaming more than three million times each week since it peaked in September.

“I am so excited to release Never Say Never’” said Swindell. “I wrote Never Say Never with Jessi Alexander and Chase McGill in 2018 about a relationship you just can’t stay away from. I have been a fan of Lainey Wilson’s for a while now and what she brings to this song is everything it needed. So glad it’s finally out!”

“Things a Man Oughta Know was such an incredible ride, I can’t wait to get this next song out into the world and see where it leads,” said Lainey Wilson “It makes the journey that much more special that I get to share it with a friend this time around—I’m looking forward to playing it for y’all and I’m sure Cole is too!”